UVGI involves electromagnetic radiation in the UVC band of 200-280 nm which destroys the reproduction ability of microorganisms including viruses, bacteria, and fungi. Traditionally the upper-room UVGI-UVC has been successfully employed in healthcare facilities to inactivate tuberculosis (TB) bacteria in isolation rooms and TB wards. The current COVID-19 pandemic has created a renewed interest in the upper-room UVGI applications to control the spread of the SARS-CoV-2 virus. Wall or ceiling-mounted UVC fixtures are generally employed to generate UVC field at 254 nm wavelength in the upper part of a room close to the ceiling. Mixing airflow patterns in space presumably helps carry the infectious aerosols into this UVC radiation field where microorganisms are inactivated. The rate of such inactivation depends on the type of microorganism, UVC intensity, and the duration of exposure to the UVC field. To avoid the exposure of occupants to hazardous UVC radiation, high UVC intensities are directed towards the ceiling.

Several factors can affect the performance of upper-room UVGI applications. The location and type of UVC fixtures, UVC output from the fixtures, and UVC reflective characteristics of adjacent objects such as walls, ceiling, and other ceiling-mounted objects can affect the UV intensity distribution in the space. Additionally, indoor airflow patterns play a crucial role in determining the flow path of airborne pathogens and their residence time in the upper UVC field, which in turn, determines the effective kill rate of microorganisms.

Airflow patterns and the resulting flow path of airborne aerosols depend on several factors including the number, location, and type of supply diffusers in space; supply airflow rates (air change rates) and associated diffuser throws; supply air temperature; number, size, and locations of return/exhaust grilles; the location and strengths of various heat sources in a room; an arrangement of furniture and other obstructions to airflow; location, type, and capacity of other air mixing devices such as ceiling fans; and importantly, the relative positions of sources of aerosols in space. Strategic selection and layout of supply diffusers and exhaust grilles combined with appropriate size and capacity of UVC fixtures can help optimize the UVC dose for effective inactivation of microorganisms.

Physical testing and real-time measurements of all the parameters that affect the upper room UVGI performance are often time and labor-intensive, if not impossible. Intuitive design approaches based on rule-of-thumb may not yield the desired performance. In such situations, Computational Fluid Dynamics (CFD) analyses provide a feasible alternative to gain comprehensive insights into the distribution of UVC intensity, airflow patterns, and the possible inactivation of airborne microorganisms. If performed properly during the early stages of design with adequate expertise, CFD analyses can help optimize the performance of UVGI systems. CFD analyses help create better indoor air quality with reduced risk of infection in the indoor spaces.

Figure 1: Schematic of CFD models with and without UVC luminaire for a small office with two cubicles.

Figure 2: CFD analysis predicts the distribution of UVC intensity in space and identifies a zone of high and low UVC intensities. It shows the high UVC intensities are located in the upper part of the room

Figure 3: CFD analysis shows contours of infection probability computed by Wells-Riley correlation at a breathing plane of occupants. It shows the effectiveness of the upper-room UVGI system in significantly reducing the probability of infection.

CFD analysis is an effective tool in the design and optimization of upper-room UVGI-UVC systems. 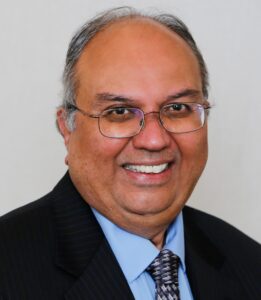 Dr Kishor Khankari is the founder of AnSight LLC. As a specialist in Computational Fluid Dynamics (CFD), his passion for solving engineering problems and providing sound scientific solutions has led to innovations and optimized designs in the industry.

A noted expert in his field, he has a Ph.D. from the University of Minnesota and has published in several technical journals and trade magazines. As a well sought-after speaker Dr. Khankari makes regular presentations in various technical conferences and professional meetings worldwide.

Contaminant Control for Pharmaceutical Cleanrooms Pharmaceutical cleanrooms are employed for the manufacturing of sterile and nonsterile drugs and medical products. Cleanroom facilities are required to maintain a certain level of cleanliness to keep the aseptic...

HVAC for Built Environment The main purpose of heating, ventilation, and air conditioning (HVAC) for buildings is to maintain a healthy and comfortable indoor environment for occupants. Air is the primary carrier of heat, moisture, and airborne contaminants in indoor...